Behind the Scenes: The Madeleine Trilogy [Spoiler Alerts!]

*** [This post contains spoilers, so don’t read it if you haven’t read Madeleine Strays, the third volume in my wife-sharing romance, The Madeleine Trilogy, unless you’re the type who likes spoilers] ***

I wouldn’t normally respond to individual reviews, as much as I appreciate readers for leaving their thoughts and recommendations, but I do worry that in this case, other readers may take the incorrect interpretation of the plot of The Madeleine Trilogy from a couple of the more angry responses put up on the Amazon page for Madeleine Wakes.

To start with my email from “B”:

Could you confirm the timeline of Madeleine and Connor’s relationship? My understanding is that she went out on her first real internet date with Matthew, which went poorly. Soon after that she decided to drop internet dating and go out with Connor. Her first date with Conner then took place sometime in mid December, at the beginning of chapter 5 from Strays.

Madeleine’s fake dates with Will, in late January, were just her way of introducing Hugo to the reality of her relationship with Connor. Madeleine also lied to Lucy, who believed the first time Madeleine had kissed Connor was the night of her first fake date with Will, when in fact by then they were already having sex.

So Connor and Madeleine had been having sex for about a month or so before the time Hugo believes he’s watching them have sex for the first time. I think many people are confused by Hugo’s reaction to Connor’s revelation, in particular when he thinks “She’d been fucking him all this time.” “All this time” here means “The whole time she was doing fake internet dating,” but some reviewers on Amazon seem to have misinterpreted this to mean “The whole time since the beginning of book 1.” Really she was just playing through the exact scenario they had discussed during their dry run at the W.

So, my response to “B” was that he was correct. Except, (I think, my memory is slightly hazy so long after writing it), that I think Madeleine didn’t lie to Lucy, they were in cahoots on this. Lucy told a few lies to Hugo to keep Madeleine’s dating with Connor covert.

Madeleine is her own woman 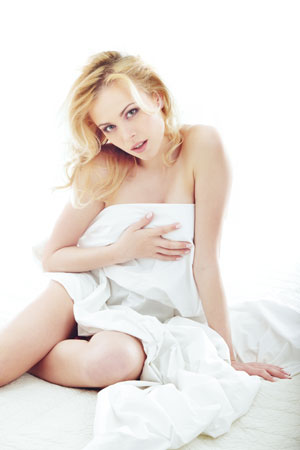 One of the key points of The Madeleine Trilogy is that as well as charting the emergence and fulfillment of a husband’s wife-sharing fantasy, it also stresses the importance of the wife’s acceptance and full enjoyment of the fantasy, and points out that her version of the fantasy may not be exactly the same as her husband’s. The wife has a slightly different take on it than the husband, and as they progress to fulfillment, she has slightly different needs than her husband in making the fantasy reality. She is not merely an object in her husband’s fantasy.

When we get to Madeleine Strays, this couple have been discussing the wife-sharing fantasy and role-playing scenarios at quite some length. Madeleine as a character is meticulous in testing her husband to ensure that this is really what he wants. She doesn’t want to risk hurting him by jumping into the arms of another man if Hugo is under the wrong impression that he wants her to do that.

So may I stress this point: In my opinion as the author, at no point in the Trilogy does Madeleine cheat on her husband.

There are no real lies, no major deception in books one or two, although Madeleine doesn’t tell her husband about her flirting since she doesn’t consider it serious. Madeleine is not dating Connor until Book 3, after the point where Hugo knows she is dating other men, and very much approves. It’s just that when she begins dating him, she conceals his identity because she doesn’t want to build up her husband’s expectations if it turns out that she has no chemistry with Connor.

When Connor and Hugo talk towards the end of Strays, he does make it seem as though he’s been sleeping with Madeleine a long, long time. But, he’s exaggerating. The proof in the text is that when Connor describes what Madeleine was wearing during his first time sleeping with her, it was a pink-and-white striped sweater. And if you read Strays closely, that point comes when Madeleine is in the process of Internet dating, and talking to Hugo about setting up lunch dates with men for the purposes, hopefully, of sleeping with them when she’s ready.

And while she’s talking to Hugo about those lunch dates, he’s hoping hoping she will take them further.

The reality of it all

So why the need for any deception at all?

Well, after such a long process of fantasizing and role-playing the wife-sharing concept, in Book 3 Madeleine finally decides to cross the line and actually date another man. Matthew, her first date, selected via an Internet website, seems attractive on paper, but when she meets him she is somewhat horrified by her lack of chemistry with him. But after all their role-playing, and because she knows how much Hugo wants her to have the great wife-sharing experience, Madeleine feels rather pressured to just go through with this, and sleep with Matthew. She could do it, and go back to tell Hugo how wonderful it was, and he would be happy. But she wants to enjoy this experience, too.

So she terminates the date pretty quickly. Madeleine feels a little crushed that the reality of wife-sharing may not be quite the sexy situation promised by the fantasy. What if she never feels able to do this in real life?

After the date with Matthew, she goes to see her friend Lucy to discuss everything. The two of them decide that since there is a man she is already attracted to (Connor), she should simply date him, and that would be the best for both Madeleine and Hugo. Madeleine is concerned that she’ll tell Hugo she is dating Connor, and he’ll immediately jump to the conclusion that this is going to be great, and that she’s having a wonderful time sleeping with another man. If she then found that she didn’t want to sleep with Connor, she would worry about crushing his hopes and dreams, and that maybe if she couldn’t even do it with Connor, it would suggest she couldn’t do it with any other man.

So, she decides to start dating Connor without telling Hugo who she is dating — she creates “Will” as a person she is dating to make sure Hugo is still consenting to her actually dating another man. In her mind, she has the full approval of her husband to date another man. She just won’t tell him who it is until she’s ready, and she knows that she has chemistry with Connor and that sleeping with him is what she wants.

So there are a few white lies here, and some deception. But, I would argue that Madeleine does not cheat on her husband, he is fully supportive of what she was doing. And in fact, when she reveals the truth later on, he doesn’t explode with anger (as some readers suggest he should have), he agrees with her that it was for the best, it is what he would have wanted her to do.

I was somewhat torn as an author in constructing Madeleine Strays in this way, only because it required Hugo to miss out on seeing Madeleine’s actual first time sleeping with Connor. Madeleine felt she needed to do this on her own, without the pressure of an audience. In real life, many shared wives are the same.

But, Madeleine and Lucy contrived to give Hugo the experience of believing he was seeing her seduction for the first time, in what he saw from the window of the apartment. At least he had that experience, before the truth was revealed. But, even when the truth was revealed, that Madeleine had already been sleeping with Connor for a little while before Hugo saw, Madeleine states that it was particularly special that night Hugo first saw her with Connor, because she knew it was his first time. And, from her perspective, she was more nervous with her husband watching, and it was a much more special experience knowing that he was watching her, and that she was turning him on as well as Connor.

Okay. I hope you can untangle all that. The bottom line is that Madeleine and Hugo have a deep romantic love for each other, and both of them want the very best for each other.

What about all that flirting?

In Book 1, Madeleine is advised by her shrink to flirt with other men in order to boost her own self-confidence as a weapon against her depression. She does that in a way she does not believe is violating her commitment to her husband. At the same time, she finds that among the various apartments across the street from hers, she can see a man on whom she develops a crush. She does fantasize about him. Some might say she goes a little far with her exhibitionist fantasy, if Connor can in fact see her. But the argument is made: we all fantasize about other people, that doesn’t make it cheating.

Madeleine is horrified when she flirts with Connor to the point where he kisses her. She immediately confesses all to her husband — and is surprised that he is turned on by her flirting with other men, and her kiss with Connor. After that, she and Hugo simply develop, examine and ultimately put into practice his emerging fantasy of wife-sharing.

So. Hopefully that clears things up.

The Madeleine Trilogy aimed to chart the full story of a wife-sharing fantasy within a devoted married couple. It began with the creation of the fantasy in the husband (and about the same time the wife), went forward with them fantasizing it, and testing it out in role-playing situations, and then ended with them crossing the line into reality. There’s strong themes about communication being challenging between the couple, but this is not a story about a wife cheating on her husband, it is as solidly romantic as wife-sharing stories get, though hopefully with a touch of realism in how the whole experience would turn out for the wife.

I do hope you’ve enjoyed the story, anyway, and hope the clarification proves helpful.