So, it’s been a while since my last story, but that doesn’t mean I haven’t been writing plenty — it just means I haven’t finished much recently.

Get your copy here >> 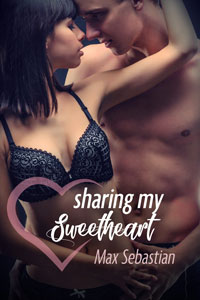 There’s definite similarities in the driving forces behind such a fantasy — that same suspense about losing someone important to you, the same excitement that she will get to experience the thrill of a new relationship, the same lust for a sexually satisfied and self-confident woman.

There’s also differences from the standard hotwife story — after all, these guys are not married. They haven’t made that ultimate commitment. But does that mean the risks are smaller? You could argue that the risk to the guy is higher: after all, he’s not married to his girlfriend, she has less formal ties keeping her with him. If she’s tempted by someone else, she can just drop him and give in to temptation, without need for paperwork or lawyers or anything complicated.

Despite being unmarried, the connection between the two protagonists has to be strong for this story to work. I’ve attempted a few stories about guys who want to share their girlfriends, and some of them have floundered because the connection keeping the original boyfriend and girlfriend together hasn’t been strong enough.

Anyway, this story worked out well, since these guys start out clearly infatuated with each other. Our hero is concerned that he will lose his girlfriend because she hasn’t been with any other guy, and relationships around them have broken down because one or other of the players was not ready for anything long-term.

See what you think…

Hope you enjoy it!