It’s been a while, but I have finally completed a new story, which is now available to buy or borrow at your local Amazon store.

In my defense, this particular story — Rock Her World — is a little more than twice as long as my last story, Hotwife Hall Pass, and the longer ones do take a fair bit more time to write and edit. 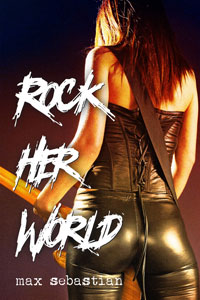 Julian Dennis knows his wife gets a little hot under the collar whenever she gets to play rock guitar, especially on stage. But now her old band is getting back together for a reunion tour, it seems that her incredible performances will actually depend on Katalina getting her rocks off regularly. And yet Julian can’t just quit his job and go on tour with the band…

While the band rehearses, Julian discovers the truth about how wild previous tours were. But rather than being jealous of his wife’s promiscuous past, Julian finds it a real turn-on — and wonders if it might be best for everyone if she was free to sleep with whoever she wanted as the band tours again…

Get your copy at Amazon here >>

Rock Her World was originally set to be a collaboration with Kenny Wright, but after we wrote a few chapters of the story, it seemed to be much more of a slow build than perhaps either of us was anticipated, and it wasn’t quite the project we wanted to do next as a collaboration. However, since the initial idea was mine, I decided to carry on the tale with Kenny supporting with editing duties.

Kenny and I are in the middle of a different collaboration project right now, which should be completed hopefully later this year.

In the mean time, here is Rock Her World, which I really enjoyed writing — as a by=product of starting it as a collaboration, what you have here is a story that reveals both the husband and wife’s perspective of the narrative as it progresses. It’s not the kind of thing I usually do, but I think it works here, and you get some interesting insights into the characters as they pursue an unconventional marital relationship.

So let me know what you think! And if you’re able to, drop a little review where you got your copy.

Meanwhile, along with the aforementioned collab with Kenny, I’m working on a few other stories, one of which will go into the next volume of “Best Hotwife Erotica”, and another (hopefully) will be given out free to my mailing list subscribers, who are long overdue another freebie.

Well, I hope everyone’s had a good summer! And, as ever, thanks for reading.