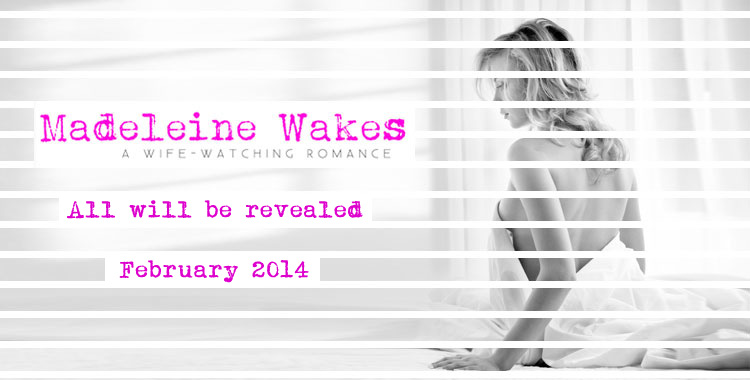 Excerpt from “The Madeleine Trilogy” – A wife-watching romance

An Excerpt from “The Madeleine Trilogy”

It was still too early for a line to build up outside the club. They were nodded inside by the bouncer, whose eyes strayed all over Madeleine, making Hugo feel a flicker of pride and exhilaration. She was absolutely gorgeous, and she was locking her arm in his.

A drink at the bar steadied their nerves. A strong drink, as it turned out, and Madeleine was ordering.

“Don’t normally come on a weekend.”

“I’ve only ever come here after work,” she yelled over the pounding music, which was too loud for conversation even this early.

The place was actually filling up already, it didn’t have that empty atmosphere of a party yet to begin. The darkness obscured some of the place, but they could see down to the dance floor, and it had a fair number of people jostling for room.

“I think we timed it perfectly,” she said, or rather yelled, smiling away at the fact that the barman kept ogling her cleavage.

“We probably did,” Hugo clinked glasses with her, and sank a mouthful of fiery vodka.

For a moment or two, they drank, they looked in each other’s eyes, just smiling at each other, examining each other’s faces, assessing how this was really going for the other, without needing to speak. Conversation by body language. Her eyes seeking reassurance in his—you’re sure you want to do this? You’re really interested in this? You can say ‘no’ any time, you can stop me, you can come pull me back, we can get out of here at a moment’s notice.

His eyes attempting to calm her, to complement her and to show firmly how thrilled he was they were playing this game together. Without speaking the words, showing her that he trusted her, he loved her beyond anything, and knew that she loved him.

This was just a little fun, that was all. Treading near the edge of a cliff, but with no intention of tipping over.

Finally, she drained her drink, and gave a final nod. Okay.

She leaned forward to kiss his cheek, giving him a chestful of her strong fragrance—something sexy, feminine. Chanel, perhaps, though Hugo wasn’t savvy enough to tell. Then she left for the restroom, and with a fresh drink in his hand, Hugo found himself a small table by the overhang, from where he could stare down at the assembled ranks on the dance floor.

He was shaking a little by the time he saw her emerge, a solitary figure quickly absorbed by the throng.

It looked almost as though she’d pulled her dress down a little, if that was possible, until Hugo realized that from his vantage point up above, it probably just gave him a better view down her cleavage than at ground level. Still, she looked stunning, and as she began to move to the beat, she only looked more and more so, the motion enhancing the elegance and the femininity of her curves.

Hugo could see various male eyes checking her out, even from those already apparently with someone else. It made him tremble. Felt like he was monitoring a beautiful lamb while wolves paced in the shadows, waiting for their moment to pounce.

Madeleine glanced up at her husband, checking on him, though she didn’t want to react in a way that let anyone know he was there. Hugo returned a warm smile, showing her he could see her, he was ready for her to have a little fun.

A youngish guy, maybe even younger than the college students who lived across their street, was the first with the confidence to approach her. Blond, lean, handsome enough to raise a broad smile on Madeleine’s pretty face.

His eyes were all over her as they danced, apart at first, the foot between them making it seem to Hugo that she was displaying herself to him, showing him what she had to offer. She cast a few glances up to where her husband was watching her, seeking that reassurance as the guy edged closer to her, until his hands were on her waist, and then she turned, to graze her behind against him.

Dancing in front of him, her back to him, she allowed his hands to run down her body, over those sumptuous curves, and Hugo felt a shiver course down his spine.

Jesus. This was so real. Actually seeing this guy with his hands all over her, even briefly over her breasts, though that made her turn and silently chide him.

What was he saying to her? Leaning in, murmuring into her ear, periodically making her smile or laugh or roll her eyes. Whatever his approach, by the end of the number Hugo suspected she was less than impressed with his chat-up lines. She dispatched him to the bar, perhaps to fetch them a drink, but by the time he’d returned, she was already dancing with someone else.

Three of them, all a few years younger, danced with her. As she did so, Hugo started noticing her focus shifting to another part of the club.

He craned his neck trying to locate where her glances were directed, and saw an older guy hovering by at the bar watching her, occasionally nodding or raising his glass at her, biding his time while she worked off her energy with these young suitors.

Hugo felt sparks of jealousy firing off inside him every time her eyes darted off to the side, to gauge the affect of her performance on this man, who had to be ten years older than her, dressing smart in a dark purple shirt of doubtless quality.

It seemed that her display was now for his eyes, not her husband’s. When she pushed out her chest, or wiggled her rear, she’d look over to this new man, offering him a coy but flirtatious smile at how she was performing with this young guy who had no hope of bagging her.

When it came time to send her young partner away, the music melted into a slower number, and Hugo watched the older man dropping his drink, sensing his moment.

He approached her with confidence, Madeleine seeming delighted that he saw her as worthy. Hugo felt a strange buzz underneath the quiver of fear and jealousy as he watched her place her hand on his lower back, and then she was pressing herself to him, accepting his hands on her body.

One track segued into another, and Hugo watched them writhe slowly together, knowing that this guy had to feel the heat from Madeleine’s body, the firm swell of her breasts against his chest. The lights seemed to dip down lower as the dance floor became fully packed, elevating the colored spots and lighting effects moving over the crowd, though making it a little harder for Hugo to observe from above.

By the third track of their dance, Hugo was down to glimpses of them each time a light flashed the right way. The man was pushed firmly against her by the crowd around them, as much as his desire for her, and Madeleine was nothing but enchanted by it.

God, it felt hard to breathe in there, too many people around him. Hugo focused on drawing in deep chestfuls of air, accented by hints of dry ice, sweat and cologne.

A flash of light, and there was a glimpse of him whispering sweet nothings in her ear.

Another flash of light, and there was Madeleine nodding, smiling, giggling, responding to him with those dangerously seductive eyes.

Another, and another, and each new flash of light brought a fresh gasp from Hugo, though his shock was balanced by the growing excitement that Madeleine was really turned on by this wicked dance.

Watching her, he felt so alive. Shaking with excitement and yet chilled by a real sense of vulnerability, a hint of doom keeping him seriously on edge as Madeleine moved with her partner, more at ease with him with every beat.

Another flash of light, and the older man was pressing his nose into Madeleine’s neck, inhaling her scent.

A heart-stopping moment of darkness, and then another flash, and Hugo felt a jolt of shock stab through his chest at the sight of the man kissing her neck gently, tilting his head to touch his lips just under her jaw. Madeleine looking a little surprised, but accepting it, slanting her head so that he might continue.

Hugo felt a little sick, and yet at the same time elated.

It was more than a little confusing. He was terrified, to the bones, and yet rippling with excitement, his manhood rock hard in his pants. She was so beautiful with her new dance partner, so pretty and elegant and graceful, a long burst of lilac light showing her moving with him, beaming up at him, adoring the attention.

Hugo was so in love with his wife, of course he was going to take pleasure in her having fun, truly enjoying herself, revealing that spark of sheer exhilaration from this unbelievable adventure.

Then, for the first time in an absolute age, he saw her looking up at him, her eyes searching out the crowd for her husband, finding it as difficult to see him in the darkness as it was for him to see her. It warmed him by several degrees to see her looking for him, checking on him, acknowledging his part in this.

She looked a little frightened at not being able to see him, until a spot light sauntered along the balcony and there he was, in bright blazing stage light. Her smile on finally locating him very nearly matching the brightness of that powerful lamp.

Her beautiful eyes pierced his, interrogating him in a fraction of a second, determining how he was responding to her transgressions with an older gentleman.

Hugo offered her a broad smile, and she was laughing, ostensibly at something her dance partner had said, though in reality it was clearly in response to her devoted husband.

He was trembling as she was cast into darkness again, and then when a new flash arrived on her, and Hugo saw her in the man’s arms, kissing his mouth, pressing up against him as she sucked on his lip, it felt as though his heart had stopped.