I generally split my time between writing and being a stay-at-home Dad, and for me the Dad part is the priority. Over the summer various crises have meant the writing part had to be put on hold for most of the time. 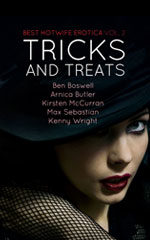 I did manage to put together a new short story, however, in celebration of this month’s Halloween. It’s 13,000 words, so it’s not too short a short story, either. And for your much-appreciated 99c (£8.95 in the UK following Brexit… okay, I’m kidding…) you also get brilliant hotwife stories from the ever fantastic Kenny Wright, Kirsten McCurran, Ben Boswell and Arnica Butler.

My story within the Best Hotwife Erotica 2: Tricks and Treats anthology is called The Ritual. I started writing a story about a husband and wife attending a Halloween party, with the wife going in a witch costume. Then while I was writing it, I wondered what might happen if the wife was really a witch — and the kind of witch that might get involved in sexual intimacy in the name of her religion. What would the husband feel if he wasn’t involved in the religion himself?

Check it out at Amazon now… as with all our “Best Hotwife Erotica” anthologies, it should remain 99c, as a thank you to our very loyal readers…

For those of you interested in future stories, hopefully you’ll be happy to hear that my writing should be ramping up again and many more hot wife-sharing and swinging stories are on their way.

I’m currently writing a wife-watching story that, I hope, really places the emphasis on the watching part of things. It’s called Alice Through the Looking Glass, and although I can’t say too much at the moment, it involves use of a large two-way mirror. It’s currently at 16,000 words, hopefully it will be finished by the end of the month, and available in November.

I’m also preparing to write a story called “Marriage 2.0”, which I’ve had on my to do list for a while, which is about a husband who resorts to a new-style marriage counseling agency to save his marriage, and the agency introduces some very strange, dark and (of course) sexy ideas with which to reinvigorate his bond with his wife.

Many more ideas ticking around, and hopefully some more collaborations with other hotwife authors…

Anyway, until next time, thanks for reading!